About the company – our history

Influences from a person’s social environment usually play a key role in determining how that person’s preference and interests develop, sometimes coincidental circumstances and events also have an impact. In Stefan Brocksieper’s case it was his father’s record collection and the dream of having plasma loudspeakers.

Stefan Brocksieper already caught the jazz bug in his early childhood, growing up to the sound of Louis Armstrong, Dave Brubeck, Duke Ellington, Charlie Parker and John Coltrane. At the age of 14 he took up the electric bass and initially played in a blues/rock band, and then switched at the age of 18 to the double bass and the acoustic jazz. Brocksieper, who over the years also had the opportunity to play with well-known professional musicians, still meets up for jam sessions with his long standing fellow band members at least  once a week, and also trains up electric bass students, who play for a hobby.

Likewise, Brocksieper had already developed a passion for technology at the age of four, and at the age of 12 had a first go at design-engineering loudspeakers, which he sold to his fellow school pupils a few years later, in order to finance his first hi-fi system. Fascinated by the loudspeakers with ion tweeters that had just been launched on the market back then, he attempted to design his own plasma tweeter toward the end of his time at school. However, he only got as far as an excellent sounding prototype with a roughly 4cm high plasma flame and getting himself accidentally electrocuted which he fortunately survived unscathed. Several years later Stefan Brocksieper, by then an electrical engineering student at Wuppertal university, believed that the time had come to turns dream into reality. A high-end dealer, for whom he was supposed to design a tube-based phono pre-amplifier, offered in return to make the industry contacts that he needed for his loudspeaker project on his behalf. This promise was not kept, but Brocksieper’s phono equalizer, called Schmendrick, named after the low-brow magician from Peter S. Beagles’s novel The Last Unicorn, turned out to be so successful that as a consequence he would go on to become a tube wizard and leave the university without gradation, in order to launch Music Components GmbH in September 1985 together with Winfried Kücke. 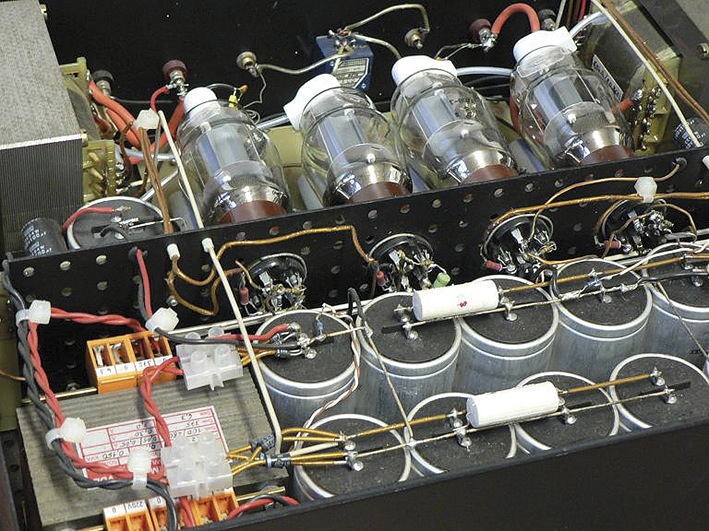 First sample of an 807 power amplifier

After they had unveiled two tube pre-amps. two power amps, a 2-way speaker and an electrostatic loudspeaker, Brocksieper decided in 1992 to split with his business partner, on account of different view of what direction the company should take in the future. He established his own manufacturing company. The very first Brocksieper branded product, a mono power amp featuring two 807 radio tubes, which, already used in Music Components models, became one of his biggest commercial successes. This was followed by a pre-amp, the PhonoMax phono amplifier and equally successful EarMax headphone amplifier. The newest member of the tube family is a digital/analog converter, with exclusively tube-based precision analog filtering of the high-frequency noise components. This ensures frequent digital reproduction shortcomings, which are caused above all by non-existent high-frequency range signal continuity and the resultant inexact time response, are eliminated to a large extent.

When designing his hi-fi equipment, Brocksieper has always been guided by the aspiration of making effective use of the technical benefits of tubes compared to transistors, i.e. their greater thermal and dynamic linearity, whilst at the same time eliminating the distortions that are typical of tubes,delivering a masking, condensing sound pattern.

The product range is completed with Arabeske and Minara 2-way speakers, where Brocksieper pays major importance to precise time and impulse response. A particular feature of these speakers are the chitin membranes used in the subwoofers and mid-range chassis. For us, no other material can top chitin in terms of mid-frequency precision and low-frequency dynamics. Thief ceramic or diamond tweeters do an excellent job in high frequency range. The top model Arabeske features a specifically designed ultra high frequency tweeter and an integrated subwoofer. Upon request both models can be upgraded with an optional tube-based active cross-over.

The next products in the pipeline are the top end version of EarMax, named „Bettina’s Edition“ in honor of his life companion and business partner Bettina Mennicke, who passed away suddenly well before her time in 2010. The other project is a mini integrated amplifier, which combines EarMax, pre and power amp features. In addition we are still working on the most precious project – loudspeakers that function at frequencies above 700 hertz with the aid of membranes, but of course feature chitin as well…